Tesla Semi: What to expect from the new self-driving freight vehicle 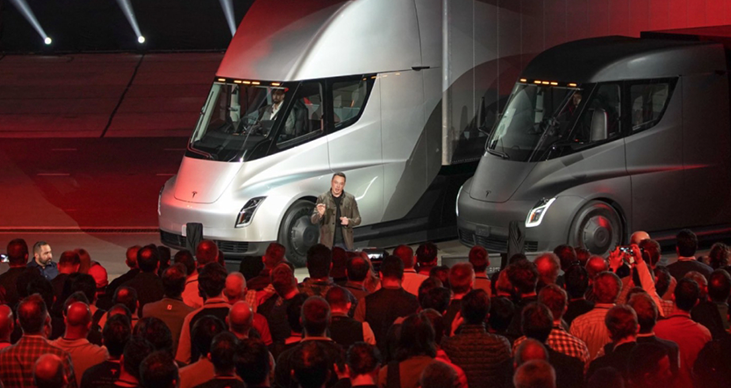 CEO and product architect of Tesla Inc., Elon Musk, is no stranger to taking risks. In fact, long before Musk made international headlines with the SpaceX reusable rocket, he’s been known to say that some of his business ventures nearly failed miserably.

Fast forward to today, and Elon is leading the charge to Mars, he’s created a NFP AI research company, and most recently, he’s just announced he’ll be manufacturing electronic semi-trucks by 2019. Business Insider reported that the move from electronic sedans to freight-hauling vehicles is a massive risk, and is indicative of Tesla’s hubris and grandiose visions and lacks the economic foresight to be truly successful.

So, is the semi-truck really such a great risk? Or is there promise hiding in the negative banter? Let’s take a look at the main features of the self-driving freight vehicle and how it will change commercial trucking in the next few years.

Although Business Insider was quite hard on the new vehicle, it’s not all bad press for the Tesla company. In fact, the writers from Supply Chain 247 have referred to the new semi-truck as ‘mind-blowing’ because it looks just like a regular old truck, but includes the features of the Tesla Model 3. Take a look at the video below to get a quick rundown:

First and foremost, the Tesla Semi is electric, meaning it uses a battery instead of a diesel tank. It’s also automatic, and doesn’t include a petrol engine or transmission; both normally seen in regular trucks. The biggest question so far about the battery powered truck have revolved around mileage and load, but fear not: the battery has been reported to supply enough charge to drive 500 miles at the load limit of 80, 000 pounds.

Aesthetically, a lot of care and thought was put into the appearance of the vehicle with Musk stating it was designed to resemble a bullet to reflect its record breaking speeds. According to Musk, the truck can hit 60mph in just five seconds without a trailer, and when fully loaded it will take 20 seconds. This was a pertinent feature to include as it's said an electronic car revolution is looming, and if Tesla is going to stay ahead of car manufacturers like Toyota and Volkswagon, they need to ensure their vehicles have the power and speed to compete.

One of the biggest highlights of the truck are the new safety mechanisms that are being built-in. Firstly, it’s designed to handle impacts better than 18-wheelers, and it features a 360-degree camera system to automatically warn the driver of any lurking dangers. This comes at a great time in the trucking industry as it’s been a long road (pun intended) to finding ways of reducing road fatalities. (Side note: if you’re interested in reading about the positive effect autonomous vehicles have on the driver fatalities check out our post on driverless trucks here.)

Although not fully autonomous, the Tesla Semi will feature the Tesla Autopilot system, meaning the truck will be able to maintain a set speed and slow down automatically in traffic if the driver is resting. For Australian drivers this need not be a concern just yet as we don't have the correct regulation and policy in place for autonomous vehicles.

Musk’s vision for the future is altruistically reliant on clean energy. Our future will be a world filled with electronic cars, trucks and homes all powered by clean energy. The great thing about clean energy is that it's good for the environment, and it delivers huge cost savings for businesses and private consumers as well.

Electronic trucks are less expensive to operate compared to its gas and diesel counterparts because they cut out one critical element: fuel. Musk states that his new semi will deliver “$200,000 or more” in fuel cost savings, and it’s been reported that just hours after the truck was launched J.B Hunt and Walmart were biting at the bit to reserve their vehicles.

Because of the nature of battery powered vehicles, it’s said that the Tesla Semi is better for short haul trips, and both Walmart and J.B Hunt confirmed they would be using the vehicles locally in the US and Canada.

Tesla is entering a competitive market, and the question surrounding this project's success will come down to how many trucks they are actually able to manufacture, and whether or not they are beaten to the market by a company that develops an efficient long-haul truck before 2019. At the moment, it’s unclear what will happen, but it is fair to say the launch of this truck is ambitious, promising and game-changing.

So that’s the breakdown of its main features; all up it’s fair to say the Tesla Semi will save businesses money on fuel and maintenance, and will also provide a safer alternative on the road to traditional trucks. What are your thoughts on the launch of this new truck? Do you think it will revolutionise freight-hauling? Let us know in the comments below.